Not Much Knitting So Far

Not much schoolwork either. I've got part of a toe, and that's about it. Only knit for like half an hour yesterday. I'm also partway through a book for class, and by partway I mean the reading equivalent of "part of a toe". Sigh.

My best friend's coming to visit on Thursday. This will be nice. Anh and I have been snarking at each other for a bit today. I hope we both stop soon. Also, I need a shower. >_>

At least for the Knitting Olympics. It'll be awesome. :D

I'm making a pair of toe-up socks, using a heart cable pattern, and the construction of Chevrolace, with minor modifications. Obviously I'll screw with it. I do to every pattern, especially the ones I make up myself. Since I've knit Chevrolace before, and enjoyed it, I think this is a good fit. For the yarn, I'm using Artyarns Ultramerino 4 in color 115 (basically a valentine's pink/red mix). I'm balling it right now. That's allowed, right?

The reason for the hearts is the pink yarn, and the reason for the pink yarn is twofold: it's been sitting in my stash for too long, and Valentine's day is this Sunday. I just realized I haven't updated this blog since I started dating Anh, so this will be interesting. I've also stopped blogging so frequently, what with college and all. It'll be nice to return to it.

I think it's fitting that my return to knit-blogging corresponds to the start of the Knitting Olympics. Very fitting. 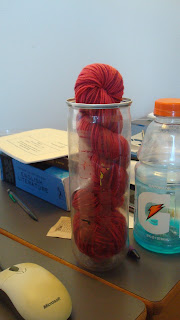 I, a knitter of able hands and quick wits, to hereby swear that over the course of these Olympics I will uphold the highest standard of knitterly excellence.

I will be deft of hand and sure of pattern, I will overcome troubles of yarn overs and misplaced decreases. I will use the gifts of intelligence and persistence (as well as caffeine and chocolate) and I will execute my art to the highest form, carrying with me the hope for excellence known to every knitter.

I strive to win. To do my best, and to approach the needles with my own best effort in mind, without comparing myself to my fellow knitters, for they have challenges unique to them.

While I engage in this pursuit of excellence and my own personal, individual best, I also swear that I will continue to engage with my family in conversation, care for my pets, speak kindly with those who would ask me to do something other than knit, and above all, above every stitch thrown or picked, above every cable, every heel stitch, every change of colour, I swear this:

That I will remember that this is not the real Olympics, that I'm supposed to be having fun and that my happiness and self-worth ride not on my success....

but on my trying.

So I did a massive load of laundry. And as I was moving it to the dryer, I saw a flash of sky blue. Yes, that Koigu-blue. The chevrolace made their way into the washer............I freaked out for a while, and then gently extricated them.

And nothing had happened. It was quite a shock to realize I had put something into which I spent a lot of effort into a machine with a propensity for eating socks, but I feel like sometimes it's better. The same way jumping into cold water is sometimes better than trying to ease yourself into it bit by bit.

So if I hadn't been a complete idiot operating on four hours of sleep, then I would never have had the courage to put my hand-knit socks in the washing machine, even after hearing people talk about it. But I did, accidentally, and so that accidental act acted in lieu of courage.

The semester's starting today. All break, I worked on the left glitten. It took like three days of lazy knitting, so I've got major second glitten syndrome at the moment.

I'm listening to a song by Onitsuka Chihiro, who is amazing, and thinking of all the knitting I could do this semester. I cast on for a pair of Charade socks for me, in the Cherry Tree Hill Supersock (in Dusk), and the stitch pattern is really low-key, the colors are very deep, and it almost seems like it could be a man-sock. Except it's small.

So I'm sitting here with a ball of yarn the size of a large grapefruit, and it's in a nice ball, too. I wound this one myself, and it's a lot nicer than usual (and center-pull, at least for now...)

Guess how I made it?

I took a large knitting needle, two pieces of cardboard, and made a turkish-spindle-like apparatus. And then I wound. All I had to do was move my right arm up and down while spinning the whole thing by the needle. I felt like a human ball-winder, but it worked. Heh.

I'm planning on making another Odessa, this time for my mom, out of this yarn.

I was thinking about what it means to be a better knitter, and I know it's easy to say "you're a good knitter when the finished product is beautiful and takes little time."

But I feel that's wrong, ja? Being able to knit even stitches, keep a consistent tension, choose colors that go together well, all these are tangible effects of experience. Yet there are some other things I feel we think about and then banish to corners of our minds.

When you modify patterns because you know this technique doesn't suit you. Not that it's something you're uncomfortable with--by all means do things that scare you a bit--but rather that you've tried it before and you don't think it works with the rest of the project.

When you start to fix things more efficiently. I for one feel like this comes not from "1337 knitta skillz" or anything but from a simple desire to spend less time undoing your valuable knitting. To cut corners and minimize the damage. And yet people think being able to fix something by dropping stitches rather than by frogging is more advanced.
It's just lazier, but when you get to that level, you can afford to be lazy, because it won't hurt you. Too much.

The holes in myself, I fill with knitting. I made this scarf in 9th grade. It was my second FO (yes, ever.) and I had lost the first one. (More about that later.)

I made it out of yarn my mother had used to make a sweater for me, but it would work in just about anything. It's a really basic pattern, pretty easy to memorize, it doesn't roll up, and it's skinny enough to wrap around a couple times without being so skinny that it doesn't keep your neck warm.

As far as I can remember this was it:

CO 26 sts, any CO you'd like. Make sure it's fairly stretchy.

Here are some handy dandy pictures:

This is the actual chart, RS and WS rows. Green implies cabling, if it's after the k2, then CL, if it's before, CR.


Here's a nicer version, with only the RS rows put in (to get a feel for the pattern):

Sorry about these charts, they're made from a java program I wrote myself and so they don't have cables and stuff added yet. Still pretty nifty, eh?

And here's a picture of the actual scarf, that's served me well for four years now: